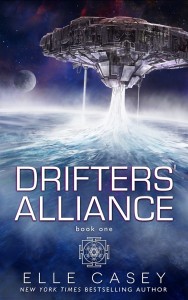 What motivated you to write a SciFi novel?

I'm a big fan of reading science fiction and watching sci-fi movies and television series, and I like to write about things I enjoy as entertainment. Plus, I often wonder what the world for my children or their children will look like in fifty or a hundred years, so my brain is always busy building future worlds. I've written in the science fiction sub-genre “dystopian” before (my Apocalypsis series), so I feel like it was a natural progression for me to try a space opera, being that I like to spread my wings and try new things pretty frequently. It wards off boredom and keeps life interesting!

What's your approach when writing in other genres?

Generally, I just jump right in. Because I read in all the genres I write in, I'm pretty familiar with what readers are looking for (at least, I like to think I am). For motivation and to get the creative process kickstarted, I usually begin with either making or commissioning a book cover, because I find the artwork very motivating and inspiring. I also listen to music that reminds me of the main character's struggle or personality in the weeks before I start; that helps me create a picture of who they are in my mind. In this latest series, Drifters' Alliance, I actually did a Google image search and downloaded photos of the characters as I saw them in my mind. After this point, once I have at least the main character solidly in my head, I just write. The story flows from the characters and the scenes I put them in.

What did you have to modify / adapt about your usual approach to write this series, Drifters' Alliance?

I thought I wasn't going to have to change anything about my approach … and that was very naive of me. Stupid, really. I've watched I don't know how many sci-fi shows without even realizing how much background work went into building the world, creating the dialogue with loads of new vocabulary, adapting the necessary mechanics to the world and the ships and the astrophysics, etc. I started writing my first scene of Drifters' Alliance, Book 1 and realized within the first paragraph that this new world my chacters were living in was totally blank and needed a lot of filling in with detail. So my writing this time has been slower and done in fits and starts in between doing a ton of research and coming up with a whole new lexicon for the series.

What was the most challenging aspect of writing in a new genre?

Creating the new world, without a doubt. The second most difficult aspect was learning the astrophysics involved and functioning within those rules. I was terrible at regular old Earth physics in high school; I have a very hard time learning things that are abstract, like I consider physics to be. Google is my best friend right now.

Because I wanted to create my own Elle Casey future world that was plausible and believable, and I didn't want to use a world created by others before me (George Lucas, Joss Whedon, Jason Rothenberg, et al) I had to imagine what kind of ships would exist in the future when space travel would be the norm, what lingo would go along with those ships and with those people, what slang would develop in that atmosphere (no pun intended), what they'd have to wear to protect against radiation exposure, what future technologies might exist, what problems might occur with health living in space and how to combat those problems, and so on and on and on… it's a monumental task I was not prepared for. Even in my dystopian series, I had the Earth as my world and all the normal physics I'm used to there to guide my characters and their actions, behavior, clothing, needs, etc. Drifters' Alliance is a whole new ballgame for me in world-building, but it's been really fun. I just hope I get it right for my readers!

Tell us about the cover design, and especially the symbol thingy at the bottom.

I commissioned the artwork for the cover from Jeff Brown. I found out about him from an author friend in a private Facebook group I belong to. He was amazing to work with; fast, professional, and amazingly talented, as you can see. He can draw just about anything you might need for a space opera.

The symbol on the cover is something I found doing some research. It represents what's called “Metatron's Cube”. Here's the definition from Wikipedia: Metatron's Cube is a sacred geometric figure (some call it the Fruit of Life) that sympolizes Metatron, an angel mentioned in apocryphal texts including the Second Book of Enoch and the Book of the Palaces.

Other sites I visited mention Metatron as an angel who was the scribe of God.

From a new agey site, I found this information interesting:

To make Metatron’s Cube, begin with The Fruit Of Life (13 circles). Curves describe feminine energy, so to manifest something (remember, this is a figure intended to describe creation), you must add masculine energy, represented by straight lines – then join the centres of all the circles with straight lines.

Encapsulated within the resulting Metatron’s Cube design are all of the 5 known Platonic Solids: a cube, a tetrahedron (triangular pyramid), Octahedron (two square pyramids with bases joined), an Icosahedron (twenty triangular faces) and a Dodecahedron (twelve pentagonal faces). The tetrahedron represents fire, the cube earth, the octahedron air, the icosahedron water, the dodecahedron ether and the sphere the void. Essentially, this site says, the metratron's cube signifies where the mystery of all creation meets science.

I thought Metatron's Cube was very apropos for the story that I was going to tell not just because of its history and what it represents but because the name Metatron sounded so spacey. (yes, I am that much of a dork.)

What techniques did you use to make the interior of the ship come to life for you?

I imagined it in my head. I know that's not a very exciting answer, but that's it. I had to think about what I'd use a Drifter Ship for, what important elements its design must have based on that use, and what interior features the crew would need not just to do their jobs but to live comfortably. I'm hoping to commission Jeff Brown again to draw what I see in my head so I can share it with my readers.

Who's your favorite character and why?  Most interesting character?  Which character do you think readers will like the most / least?

My favorite character so far is the main character, Cass, but I'm also liking all of the members of the supporting crew too. They each have their own quirks, the things that make them unique and interesting. I'm only 2/3 of the way into book 1, so not all of them have been revealed to me, and most of them I'm just getting to know. There's one character who's somewhat abrasive right now, but I have a feeling there's more to her than she shows on the surface. We'll see!

So I hear there's a glossary.  Why? Is this new for Elle Casey?

I'll say there's a glossary for me, not necessarily for readers. I am using all kinds of new vocabulary that I'm inventing, and I'm also creating processes for everything the crew has to do on the ship, so to keep it all straight, I have a glossary going. I have one for the ship, one for the world, and one for each of the characters. It's a lot more tracking-of-things than I've ever done for a series.

How many books are you planning for this series?

3 to start with, but depending on reader reception and enthusiasm, there could be more.

What are your favorite SciFi novels / authors /TV series / movies?